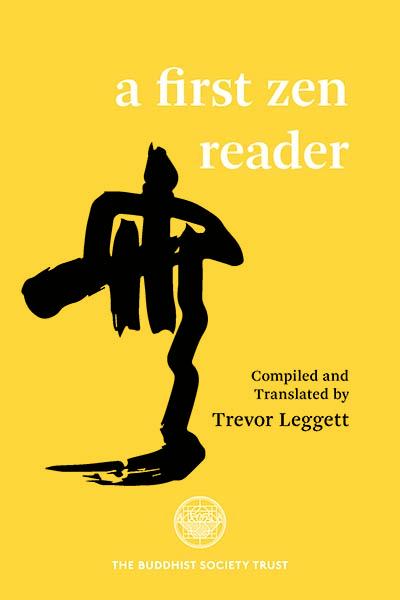 The main body of the book consists of two translations: A Tongue-tip Taste of Zen, by Primate Takashina Rosen, who was the head of the whole Soto sect in Japan, with its over 10,000 temples; Hakuin’s Song of Meditation, as commented on by Amakuki Sessan; these last were in fact a series of broadcasts over the Kyoto Radio in 1936.

When Zen Buddhism crossed from China to Japan in the twelfth century, it entered a phase of development that was not only to inspire a magnificent range of artistic achievement but also to exert a tremendous influence upon Japanese life itself and, eventually, to bring to the attention of the West a religious philosophy both unique and challenging in its power. ‘Yet’, as one of the contributors to this book (first published in 1960) expresses it, ‘if asked what Zen is, to reply is very difficult.’ It is the purpose of this anthology to suggest an approach to such a reply. The texts here translated will give a general idea of Zen theory and practice, and are outstanding selections from the treasury of Zen literature. To these, the anthologist has added a valuable ‘Note on the Ways’, in which he points out how ‘the student keeps his Zen practice in touch with his daily life’. The exceptional interest of the text is further enhanced by twenty illustrative plates.

The Rinzai and Soto agree on the main points; they differ in the stress given to certain elements in Zen, notably what is called koan. This is a sort of riddle, not completely solvable by the intellect, which is an artificial method of concentrating the energies of a spiritual student. The koan method was devised quite late in Zen history. The Rinzai emphasizes concentration on koan, especially those in the anthologies Hekiganroku and Mumonkan. The Soto, though it has its own collection, the Shoyoroku, does not make so much of them, pointing out that the masters of the golden age of Zen in the T‘ang dynasty did not rely on artificial koan. Mostly the koan are stories about these masters, though Hakuin (1685-1768) in 18th-century Japan devised one of the most famous, the “ sound of one hand.” Even this may derive from a phrase in the Hekiganroku.

The Original Face by Daito Kokushi

A Tongue-tip Taste of Zen by Takashina Rosen, Primate of the Soto Sect in Japan

The Two Poems by Oka Kyugaku

Bodhidharma and the Emperor from the Rinzai and Soto Koan anthologies

A Note On The Ways by Trevor Leggett

One can easily imagine what a less great translator might have made of much of this material: the lengthy disquisitions on technical terms, the general nit-picking and colophon-grubbing. Instead, we have here attractive, lucid prose that actually says something, than which nothing could be more desirable in this field (of Zen).

In whatever age, the problem of name and money has always been the worst. It is on this point that we go astray or are enlightened, that we sink or swim. There are only two alternatives: to be a king who can use name and money, or to be a slave rushing about in pursuit of them. Many people are entirely the latter.

The illustrious Emperor Kiso of the T’ang Dynasty in China once made a visit to the Kinzanji temple on the Yangtze River. At the temple the scenery is exceptionally fine, and the throne was set at the top of the temple tower, giving the best view of the river. The emperor was conducted to his seat. He saw on the great river countless boats, some going up and some going down, some to the right and some to the left, so that it might almost have been mistaken for the sea. He was overjoyed to see the prosperity of the country he ruled: trade and commerce thus flourishing-what we should call today a fully developed country. At his side was standing the abbot of the temple, Zen master Obaku, and the emperor remarked to him: ”How many flying sails on the river, I wonder?” In other words, how many ships would there be on the water. The abbot smoothed his robe and replied respectfully: “Only two.” The emperor’s satisfied expression was wiped off his face. What did he mean, with his two ships? Even now in front of one’s very eyes were there not at least a hundred, perhaps two hundred? Two ships indeed! Was he making light of his emperor, laughing at him and making a fool of him? His face showed that the reply was not pardoned. “How two ships?” he asked. Zen master Obaku’s expression showed not the slightest disturbance. Respectfully he answered: “Here are only the ship of name and the ship o( profit.” Name means seeking for reputation, and profit means seeking for gain. As Your Majesty sees, there a.re many ships on the river, but one half of them are sailing for fame, and the other half to make money. The ship of name and the ship of profit, only these two are on the river.

Pondering the thought, the emperor gave a deep, deep sigh. It was as the abbot had said. In administration, in economic strength, in industry, in education, the culture of the T’ang dynasty can only be called brilliant. But what of the people who participated in that culture? If their motive was not name, it was money; if not money, then name”. Apart from these two they cared for nothing. Then like thunder from a clear sky the emperor gave sweeping orders for reform. In that moment he saw the truth, and from his determined policy arose the famous culture of the great T’ angs.

The parallel is not far to seek: is not the condition of Japan today like that? There is unprecedented prosperity, and it must be called a brilliant civilization. But of the people, there are hardly any who are not wrapped up in money or fame. Those who have obtained them are regarded as well off and fortunate, and are flushed with pride, and those who haven’t them are disappointed and discouraged, writhing with hatred of everyone and curses on the world. Isn’t it so? This philosophy of name and money is an all-important problem; ugly and narrow as it is, people make it supreme in their lives and depend entirely on those two things for their support. But we have to think of our real nature and get a right understanding. We must not lose the Way here. If we are lost in these things, the rejoicing at hearing the Law will hardly arise and paradise will be far away.

It is not by chance that in the Buddhist code the virtue of rejoicing at the welfare of others surpasses even giving. Truly a noble thing, sublime and meritorious, the virtue of rejoicing for others. Now up jumps someone enthusiastically: “I agree, rejoicing for others is a fine thing. What you have said is right, and from now on I shall go in for it. Instead of striving for merit by giving money or breaking my bones helping those public movements or charitable activities which are such a nuisance, I shall watch the others doing it and afterwards rejoice and tell them how well they have done and how praiseworthy it all is! How fortunate that rejoicing rates higher than giving! What a wonderful religion Buddhism is!

” This is the greatest of errors. He who can rejoice from his heart at the good deeds of another could never be satisfied unless he himself were performing them also. Hakuin’s Song of Meditation is referring to praise and rejoicing in connection with hearing the Law, but the real virtue is to feel them from the heart at all right actions. And the sin is not just a question of not doing right actions oneself, but being envious of them in others and wanting to spoil them, ending up as a mere tool of the passions arising from narrow selfishness, a mere slave to name and profit.

People now are too much caught in desire for things, seeing only their own one-sided view, putting their ideals and seeking truth and freedom in non-existent places. Despite all their shifts and twists, the night faJls with the Way yet distant. Especially today when the materialist view of Marx dominates the world and people have eyes only for material values, they grasp at the material things in front of them without ever thinking what spirit might be, or what their souls might be. The increase of material desires becomes egotism, becomes opportunism, becomes hedonism, and it is hard to see where the process will stop. Recently I heard someone discussing the poetry game played by Japanese people at the New Year, which depends on knowing the poems of the famous Hyakunin Isshu anthology. In these poems, the ancients adored the moon and the flowers and sought to trace the mysteries of nature in blossoms, birds, wind, snow, and moon. Of course not a few of the verses also sing of human feelings and of love, but always there is delicacy and refinement in them. The modern man, wholly sunk in materialism, an expert in giving nothing away, is hardly one to appreciate such poems. Still, he doesn’t want to give up the poetry game, so let us perforce add one more line to make the poems more appropriate to him. And that line (the critic said) can be: “But I want some money too!”

Take the famous poem of Yamabe, the fourth in the anthology:

I started off along the shore,
The sea shore at Yago,
And saw the white and glistening peak
Of Fuji all aglow
Through falling flakes of snow.
We put at the end:
But I want some money too!
Let us try another one:
I hear the stag’s pathetic call
Far up the mountain side,
While tramping o’er the maple leaves
Wind-scattered far and wide,
This sad, sad autumntide.
But I want some money too!

Never mind hearing the stag’s call and treading on the maple leaves in the deep mountains and feeling sad-if I had some money I could go to a pleasure resort and have an amusing and happy time. But I want some money too! Put that on the end of each of the poems, and it will just suit the humour of the modem man.