Since  the book launches in 2018 TLAYT have continued to develop the websites and republish Trevor Leggett’s books. In 2021 new softback and eBook editions of ‘Championship Judo’ were published and in June 2022 new softback and eBook editions of ‘Realisation of the Supreme Self’’ were published and a review will appear in ‘Spectrum’ the journal of the British Wheel of Yoga in the Autumn. Work is now completed on new editions of ‘The Spirit of Budo’ which will be published shortly and the final book still to be republished, ‘Kata Judo’ will be available once again, later in the year.

The Trustees are sad to report the deaths of two former trustees, Tony Dunne who died in 2021 and Malcolm Hodkinson who died in October this year. They were both close friends of Trevor Leggett and were two of the original trustees when the Trust was formed in March 2001, making a valuable contribution to the Trust during the years that they served as trustees.

Our recent advertisment in Spectrum, the magazine of the British Wheel of Yoga 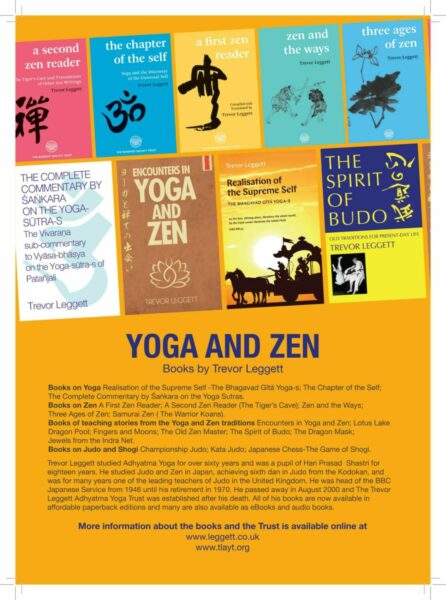 Books on Yoga: Realisation of the Supreme Self -The Bhagavad Gita Yoga-s; The Chapter of the Self; The Complete Commentary by Sankara on the Yoga Sutras.

Books on Zen: A First Zen Reader; A Second Zen Reader (The Tiger’s Cave); Zen and the Ways; Three Ages of Zen; Samurai Zen ( The Warrior Koans).
Books of teaching stories from the Yoga and Zen traditions: Encounters in Yoga and Zen; Lotus Lake Dragon Pool; Fingers and Moons; The Old Zen Master; The Spirit of Budo; The Dragon Mask; Jewels from the Indra Net.

Trevor Leggett studied Adhyatma Yoga for over sixty years and was a pupil of Hari Prasad Shastri for eighteen years. He studied Judo and Zen in Japan, achieving sixth dan in Judo from the Kodokan, and was for many years one of the leading teachers of Judo in the United Kingdom. He was head of the BBC Japanese Service from 1946 until his retirement in 1970. He passed away in August 2000 and The Trevor Leggett Adhyatma Yoga Trust was established after his death. All of his books are now available in affordable paperback editions and many are also available as eBooks and audio books.

More information about the books and the Trust is available online at www.leggett. co.uk & www.tlayt.org

Film and Book Launch at The Buddhist Society, London on Saturday 17th November 2018 at 3pm

A short film on the life and work of Trevor Leggett entitled ‘A man of the Ways’ will be shown at the Buddhist Society, 58 Eccleston Square London SW1V 1PH on Saturday 17th November 2018 at 3pm.

The film will be followed by a talk on Trevor Leggett, his books on Zen, Yoga, Judo and Shogi and on the Trust that was established after his death in 2,000, The Trevor Leggett Adhyatma Yoga Trust (‘TLAYT’).

Trevor Leggett is well known for his talks and articles on Yoga and Zen, and for his books on Zen, Yoga, Judo and Shogi. He studied Judo and Zen in Japan for a number of years. He was the first foreigner to obtain 6th Dan from the Kodokan, Tokyo and he was one of the leading teachers of Judo in the United Kingdom. He practised Adhyatma Yoga for over sixty years and was a pupil of Hari Prasad Shastri for eighteen years until his death in 1956.

The Buddhist Society Trust, in association with the Trevor Leggett Adhyatma Yoga Trust, has so far republished five of Trevor’s books on Zen and Yoga as soft back editions in 2017 and 2018. These are ‘Zen and the Ways’; ’Three Ages of Zen’: A First Zen Reader; A Second Zen Reader (‘The Tigers Cave’); and ‘The Chapter of the Self. A sixth book, a compilation of Trevor’s Middle Way articles and talks to the Buddhist Society, is planned for 2019.

Copies of Trevor Leggett’s books will be on display and available for purchase on 17th November. These will include audio book and soft back editions of ‘Encounters in Yoga and Zen’ and ‘Lotus Lake Dragon Pool’ and the new paperback edition of Trevor’s magnum opus ‘The Complete Commentary by Sankara on the Yoga Sutras’. TLAYT also hopes that the new soft back editions of Trevor’s two Books on Judo, ‘Kata Judo’ and ‘Championship Judo – Tai-otoshi and O-uchi-gari attacks,’ currently in preparation, will also be available by the 17th November.

All are welcome. Arrival from 2.30pm for light refreshments. Following the talk, tea and cakes will be available at about 4pm and the book stall will be open.

All those attending will receive a complimentary copy of Trevor’s last book ‘Jewels from the Indra Net’.

The Trevor Leggett film and talk form part of the Buddhist Society’s 94th Anniversary Day celebration which starts at 11.00am. Anyone wishing to attend the events in the morning should contact the General Secretary, Odin Biddulph, on info@thebuddhistsociety.org or 0207 834 5858.

Published by the Buddhist Society, London, in partnership with TLAYT, these four books are being offered in new, high quality, softback editions.

Jewels from the Indra Net
Trevor Leggett’s last book of Yoga and Zen teaching stories will be available late in 2018 as an e-book edition published by TLAYT. It will have a new cover designed by the winning student of Sussex Coast College, Hastings design competition sponsored by TLAYT.

‘The Dragon Mask’ a book of Judo stories in the Zen tradition is now available in e-book and softback editions published by Ukemi Productions Ltd at £6.15 and £5.36 respectively.

‘Encounters in Yoga and Zen’ and ‘Lotus Lake, Dragon Pool’: new editions of these books published by TLAYT are now available as audiobooks, e-books and softback editions at £7.99, £4.99 and £8.99 respectively.

‘The Complete Commentary by Sankara on the Yoga Sutras
– The vivarana sub-commentary to Vyasa-bhashya on the Yoga Sutras of Patanjali’ is available now at £4.99, published by TLAYT this new e-book edition contains two additions to the original edition – a short guide on ‘How to use this book’ written by Trevor Leggett and a new Preface produced by Dr. Kengo Harimoto of Mohidal University, Thailand. Dr. Harimoto is the author of ‘ God, Reason and Yoga’ and many other academic works including papers on the Patanjali Yoga Sutras.

On 28th June 2017 TLAYT launched the new audio book, e-book and soft back printed editions of ‘Encounters in Yoga and Zen’ and ‘,Lotus Lake Dragon Pool’, together with the new e-book edition of ‘The Complete Commentary by Sankara on the Yoga Sutras’. The Buddhist Society kindly agreed to act as our host at a launch day event held at 58 Eccleston Square and the speakers included Dr Desmond Biddulph for the Buddhist Society, Peter Longcroft and Michael Baker for TLAYT and Peter Anthony Monk, the composer and performer of the music that was produced for the two audiobooks. We were pleased that among those who attended  were Judith Clark  of the Zen Group, who wrote an introduction and read some of the stories in ’Encounters in Yoga and Zen’, Malcolm Hodkinson the TLAYT Vice President, Bernard Alexander former TLAYT trustee and Treasurer, Jonathan Miller the MD of M-Y Books Ltd who produced and is distributing the e-books and softback books for TLAYT and who is also distributing the audiobooks, and many others who came from from Buddhist, Zen, Yoga and Judo organisations.

TLAYT are delighted that a publishing agreement has been signed with the Buddhist Society to publish new softback editions of a number of Trevor Leggett’s books which have been out of print for some time. Super new editions of ‘Zen and the Ways’ and ‘Three Ages of Zen’ are now available at a price of £12.99 each and they are being distributed by Kodansha International. In the Spring of 2018 the two Zen readers ‘A First Zen Reader’ and ‘The Tiger’s Cave’ will be published by the Buddhist Society and a launch day will be held at 58 Eccleston Square to mark the occasion and at which we hope to show the film of Trevor Leggett’s life and work, ’Man of the Ways’ which was produced for TLAYT by Dr Diana Birch and her charity ‘Youth Support’. Full details will be given a bit nearer the time.

Trevor Leggett’s book of Judo stories in the Zen tradition, ‘The Dragon Mask’, has been republished by Ukemi Productions Ltd in both e-book and soft back editions and they are available from Amazon now at a price of £5.36 and £6.15 respectively.

TLAYT is working on producing its own e-book edition of ‘Jewels from the IndraNet’ and it will hopefully be available early in the New Year. It will have its own new cover that will be designed by a student of Sussex Coast College, Hastings, the winner of the College’s design completion that is being sponsored by the Trust.