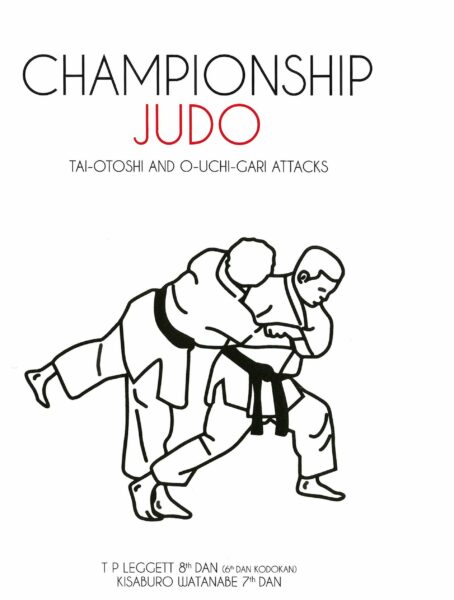 How to Build Up Attacking Movement

One purpose ofthis book is to explain how to build up attacks on Taiotoshi and its main partner Ouchigari, but you can use the method in learning how to master any main throw. Read the whole book quickly once, and then repeatedly run through the flicker at the top right from page 63 backwards to page 13.

Then you should have a rough idea of Taiotoshi and Ouchi, and of the spirit of Judo movement.

Your Judo progress depends on three main things: free practice (and contest); formal practice of the movements; study. Get first a rough idea of the movement and keep trying it vigorously and enterprisingly in free practice; don’t fuss too much with detail at this stage. Taiotoshi is called in Japan a ‘choshi-waza’, which means that timing and rhythm are all-important. One day your opponent will go down when you hardly realize you have thrown him, and this will give you an idea of what the throw really is. Study is to help you understand the principles of the throw; formal practice is to help you to begin to ‘feel’ the movement.

After a week or so splashing around with the rough idea, begin your study.

Take one point and try to get it fairly accurate; to do this you will have to go fairly slowly, but remember it must still be a Judo movement. If you go too slow your movement will cease to be effective, even against a static opponent.

Don’t expect to get the proper movement right away. Some people hope for the impossible. If you could see the body images in your brain by which you feel position and initiate movement, you would find that while an enormous number of brain-cells are devoted to fine discrimination of the hand for instance, there are comparatively very few for trunk and neck. This means that you simply cannot feel accurately your trunk posture and vary it as you want. For some time your training is in effect establishing new discriminations and control in the body images. As you try free and formal practice, the defective parts of the body images are developing.

An ordinary man, for example, takes about one year before he can stand on one leg for five minutes; in Judo you have to balance on one leg while performing difficult techniques. It takes time, but to develop good feeling and control of the body is of great value in life, and according to the Zen Buddhists, it is of importance in spiritual development as well.

Similarly, most people are hampered at first by a sort of physical timidity, a reluctance to throw themselves into a movement. This too is overcome by practice, and to solve this problem is also a great help in life. Dr. Kano, the founder of Judo, stated clearly that a real understanding of Judo principles can be applied to life as a whole, and when it is so applied, it produces a harmonious development of body, mind and character.