The Thinker, East and West
It has been an axiom for thousands of years in the Eastern traditions that the body reflects the mind, as the mind reflects levels deeper than itself.
Rodin’s ‘Thinker’ is here side by side with the 8th Century clay figure of a Chinese Lohan or Buddhist saint. Both of them have been thinking, but what a great difference! In fact, the wonderful technique of

Rodin conceals the unnaturalness of the posture. Most people, asked to sit like the famous ‘Thinker’, put their right elbow on the right knee. They are quite surprised to find out that it should be on the other knee, an uncomfortable position that cannot be held for more than a short time. The knuckles of the right hand are pressed so hard against the mouth that the lips are pushed out of shape. In spite of the apparent calm of the pose, the figure is expressing inner agony, appropriate perhaps for one looking at the gate of hell. (That is the original setting.) 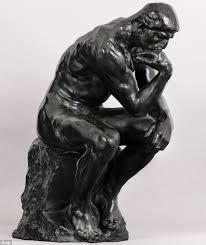 Rodin’s Thinker conveys his acute observation that most people do not know how to think. In this bronze it is as if the thinking faculty were calling on the physical body somehow to help, by distorting itself. The mind cannot simply think; it demands that the body should play a part too. But it cannot tell the body what that part should be, and the body does not know what it is expected to do. So it twists and turns in frustration. Rodin’s genius conveys this too: very soon, the Thinker will have to move. The body twist will slip, and the pressure on the mouth will become too uncomfortable. There are other points in the posture showing its inherent instability. And apart from the physical discomfort, he will want to move anyway, to relieve momentarily his inner disquiet.

The Eastern thinker by contrast is well balanced and at ease, in body and nerves. The limbs are drawn in and centred, and the head is balanced on the spine. There are further advantages obtained from a traditional posture like this one, but they are best learned from experience. 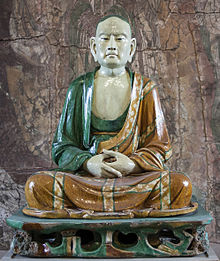 It takes most Westerners (and a good many Easterners too) some time to acquire a good posture. In actual practice, the half-lotus is generally used. This can be attained by a normal person under thirty in six weeks. If the muscles have shortened from habitual chair-sitting, this position can be conveniently acquired outside the meditation period. Sit morning and evening for thirty minutes on a folded blanket on the ground. Draw in the legs, and put one foot on the opposite thigh, the other being tucked under the hips. Read a spiritual book, and the moment there is any pain, take down the foot, and put up the other one instead. Alternate the feet in this way for the thirty minutes, having a short rest period if necessary.

Slowly the knee of the uppermost leg will ease itself down, till it rests on the ground. Young people notice the discomfort at first, then cease to notice it, and finally after three months find the position so comfortable that they may fall asleep in it.

As soon as the position is tolerable for half an hour, it should be adopted for meditation proper.

Before taking the formal sitting position, it is a good idea to stretch the limbs. This does not imply the contortions of the so-called hatha- yoga, which is a late development, probably about the seventeenth century AD. One of its main purposes (as can be seen from some of the inducements to practice mentioned in its basic texts) is to improve the functioning of the physical and prāṇic instruments, and it often leads to intensified identification with them. The traditional yogic practices are to secure reasonably good health so that the body does not disturb meditation and ordinary life. There are formal stretching exercises, which were taken from India to China, but these too can become a mania. For most people it is sufficient to imitate the stretchings of a cat when it wakes up. The limbs are extended and then flexed, in turn, and then the whole body, and head and neck.

For the meditation proper, a reverence is made, and then the seat taken. The hands are usually lightly clasped, the abdomen pushed a little forward, and the chin drawn in without strain. It is important to take exactly the same posture each time. The body becomes used to it, and settles more comfortably into it. After training for some time, the adoption of the posture has itself a calming effect on nerves and thinking process.

On the same principle, it is best to sit in the same place, and at the same time every day. There are many advantages in establishing a regular rhythm, in meditation as in other things. When an athlete practises every day at the same time, about half an hour beforehand his blood pressure begins to go up, and the muscle tone improves, in anticipation of the exercise. On days when his body is fatigued, the current of practice carries it along without much effort. Similarly a regular meditator will begin to experience an inner pacification even before the formal sitting begins.

While life happens to be flowing fairly smoothly, one may feel that one has no need of such devices. As so often in spiritual training, the thought comes: I should be free, free, free. Nevertheless, it is worth adopting them, making use of the experiences of the experts of the tradition. Many of us find that when circumstances become really turbulent, we are not quite so tough as we thought we were.

There are schools which lay great stress on formal posture. Many yoga schools however recommend simply approximating to it, and then doing one of the Line of Light practices. This produces what is technically called an up-stroke, which spontaneously pulls the body up into a good posture. As this comes about of itself, to fuss over it is only a distraction. And in fact meditation on God does itself bring about good posture along with other advantages: ‘From devotion to the Lord comes perfection in samādhi’, says Patañjali’s Yoga Sütra.

One of the purposes of the meditation posture is to lead to transcendence of the body-consciousness (Yoga Sūtra 11.45). To be slumped in an armchair is not in fact relaxation: there is constant shifting, and inner tension even when not moving. Good meditation posture is a sort of knack, which gives a sense of opening and expansion: poets have compared it to an infinite blue sk