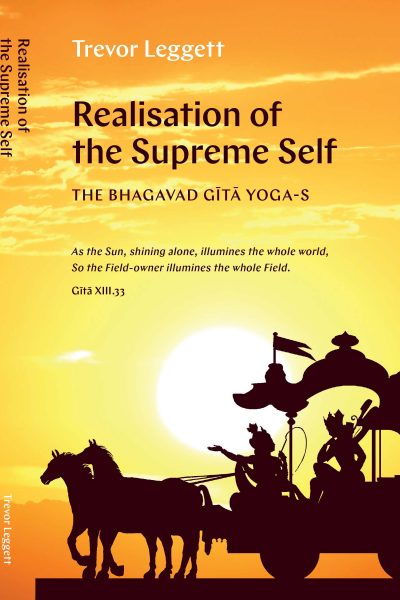 “One evidence is that texts like the Gita present us with graded practical experiments. Do these, it says, and you can have direct experience of a God who is not simply your own idea. The experience is no illusion, because it is fruitful in life; it gives not only calm inner clarity, but also inspiration and energy for action. You will come to know the divine purpose in outline, and your own proper part in it in detail.”

“In deep meditation one experiences how everything is dying: body, mind and every thought. But one can find something that does not die – the immortal in the mortal. And when death comes there is the awareness in the meditator: “I have been here before.”

The Bhagavad Gita (‘Sung By The Lord’, about 500 BC) is a mystical section of the huge verse epic Mahabharata, and it is often called the Bible of India. Much of the religious instruction in the epic, like that of the still more ancient Vedas themselves, is concerned with how to worship and act so as to bring about rewards in the form of an ideal social order, individual prosperity, and a future in Heaven. The basis is devout action in faith. A few verses in the Gita refer to this ‘trading’ religion as it is called, and the whole Gita has been taken in this sense.

But India’s greatest philosopher-yogin, S’ankara, wrote a famous commentary on the Gita, in which he showed that its purpose is quite different. The declared central purpose of the Gita is quite different. It shows the way to realize freedom from limitations of individuality, to confront, and finally become, the Cosmic Spirit in its manifesting and then in its transcendent form. The basis is experiment.

For instance, action is minutely analysed as creating restriction and suffering; it is shown how passion and sense of personal struggle distort action and make it inefficient. It becomes badly directed and has to be forced, creating outer friction; then the inner fears and hopes create inner friction. These experiments can be done in small way, and if they confirm what has been said, it seems reasonable that the deeper meditation experiments can be confirmed also. In activity, there is a much higher state where there is no sense of a personal ‘I do’; cosmic energy expresses the cosmic purpose – the ultimate welfare of all beings.

PART II YOGA-S OF THE GITA

The special merit of this book is that it points us firmly in the right direction. In our study of yoga we meet an almost infinite variety of doctrines, ideas and methods. The roads are many – how do we know when we are on the right path? The answer is clearly given in the ancient classics of India. As the Gita says, “When thy mind, which may be wavering in the contradictions of many scriptures, shall rest unshaken in divine contemplation then the goal of yoga is thine”.

This book is an excellent guide accessible to all. While highlighting the heart of the Gita text, the author by means of contemporary examples and illustrations helps to bridge the gap with the modern audience allowing the timeless message and guidance to shine clearly through. The book is aimed very much as a prompt for personal practice and experimentation: in essence the aim of Gita itself. A challenging and inspiring book, one to read and re-read and to use.

The practice of the eighth chapter presents mainly meditations on the Lord felt as within the body. First the mind and the prāṇa currents of vital energy are focussed at a centre in the heart. Then the focussed attention moves up with them to a point on the forehead roughly between the eyebrows. People who try this soon find that the concentration becomes confused. They are not sure when they have enough concentration to begin the move upward, and become indecisive.
The Gītā explains that it is done, and can only be done, by what it calls the ‘strength of yoga’. Śaṅkara explains that this strength is in fact the after-effects of long practice, repeated till the saṃskāra-impressions have been formed strongly in the causal part at the root of the mind.
The process is then accomplished spontaneously, so to speak, independent of the discursive mind. Repeated practice has laid down impressions which now hold the samādhi completely steady. It becomes a luminous movement, rising of itself, as it were. It is stronger than any interruption because the meditation is based on a natural current, latent in the ordinary man, but now showing itself. It is thus truth, and truth is stronger than the illusory concerns and memories of the world. But truth has to be brought out before it is experienced clearly.
The process can be seen in miniature in the drawing-up movement which occurs when any meditation, begun in a reasonable posture, begins to come to samādhi. There is usually the feeling of a current moving upward in the centre of the body. In some yoga systems it is called the ‘upstroke’; Patanjali notes that it follows on prāṇāyāma practice, done for a certain time. The length of time to the first up-stroke is noted (counting in breaths). Then the process is repeated.
But formal prāṇāyāma practice is not an indispensible condition. Deep meditation alone can lead to it.
The Gītā refers to it as taking place even at the time of death, when worldy concerns might be expected to be at a peak.
Śaṅkara points out that normally this manifestation of the up-stroke would be the result of repeated practice during life, though it might also be from the direct grace of the Lord alone.
How is it practised? Some direct instructions are given by Swami Mangalnath in The Heart of the Eastern Mystical Teaching, a book by Dr Shastri, who had known Swami Mangalnath well:

A few hints from my personal experience may perhaps be useful. The hollow in the centre of your body where the ribs join just below the breast bone is the best region on which to fix your mind in meditation. You may have heard the expression ‘the lotus of the heart’; it refers to this point. You can apply a little sandal-paste to the spot and then concentrate your mind on it. Two hours a day is not too long a time for this practice. When you can fix your mind there at will, then visualize a lotus of bluish colour, and when this meditation is matured, imagine an OM placed on the lotus, and meditate on it.
Often such a passage is read rather quickly. If interested, a reader will try to centre attention on the place in the breast, but it soon becomes vague, and then boring. He moves on to the lotus, and then the OM. He begins to get confused. Soon many other thoughts spring up in the mind. Why in the breast? he wonders. Why not in the forehead? And what exactly does a lotus look like? Soon the practice drops away. Occasionally he tries imagining the lotus flower in the breast but finds it is now mixed up with doubts and guesses, and finally random memories and ideas. He drops it, with the thought: ‘I tried it, and it didn’t suit me.’
How then is the practice done? It should be noted that Swami Mangalnath says: ‘When you can fix your mind there at will.’ There in the breast at will, only then visualize a lotus of bluish colour there. And when this meditation is matured, and only then imagine OM placed on the lotus, and meditate on it.’
The exercise, then, is done step by step. One cannot rise to the next step till the foot is firmly planted on the present one. The spot is touched, and a little dab of perfume may be applied, to help the centring. Attention is brought back and back to the spot. It keeps running away, but if there is persistence for about three weeks, it remains for longer and longer periods. The practiser becomes aware of a sort of interior light there. He may also experience invigoration. He does not try to create such effects by auto-suggestion; in any case, when they happen, they are different from anything he could anticipate.
He may get a hint that the practice is developing on right lines when occasionally in the middle of the day, he feels spontaneously, without having thought of it, a little breath of peace in the heart. This is an indication that the saṃskāra-s are becoming stronger in the causal depths of the mind. Even at a time of great disturbance, perhaps temptations or fear, there will sometimes come this cooling breath from beyond. When such things begin to happen, it is time to go on to the next part of the practice: the visualization of the lotus.
Like all these visualizations, what is seen is not exactly what had been imagined as a lotus. But the description ‘lotus’ is enough to recognize the experience when it begins to manifest. In some schools there are descriptions of it as like a wheel, or like a shallow luminous bowl. As the saṃskāra-s are laid down, which conform to and reinforce the saṃskāra-s of location previously established, the state becomes vivid. It is an experience of something already there, not the actualization of the auto-suggestion. It is new, though recognizable from the meditation directions. Some of those who have had it say privately that the colour of the lotus is more beautiful than any colour they have ever seen. But limited beauty is not the aim of the practice, which must go on to transcendence. 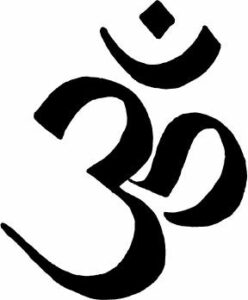 The final step is to make out an OM, standing, so to say, on the lotus. The Sanskrit letter can be taken, or the printed Roman letters. These are forms representing the Word of Glory, the natural expression of the Lord. ‘I am OM in the holy scriptures’, ‘Of expressions, I am that one syllable’ (X.25). In this fundamental meditation, the form of the letters becomes sound and light is is one of the most direct ways of realizing the Lord as the Self: it requires determination, and detachment from worldly ties. Those who have been faced with a great tragedy are sometimes disillusioned for a time: and they have a good chance with this practice. It needs resolute application, and resolute independence. Swami Rama Tirtha made OM his main method for realization. He said, ‘For one moment throw overboard all your attachments and anxieties, and chant OM. You will find yourself transformed into light.’
The final rise from the heart centre to the forehead centre is not the result of a conscious individual decision. If the basic yoga practice called the Line of Light, described here on page 145 has been carried out long enough for it to become natural, then the OM in the heart rises with the mind and prāṇa life-current. The yogin may be aware of it, or it may be as natural as digestion. It depends how much he has passed beyond personal restrictions. The blessing is the same. Though they often happen of themselves, the Gītā describes these things so that those yogins who do become aware of something happening, do not become excited by it, or shrink back before the unknown. The Gītā description is enough for them to recognize it, and accept it.