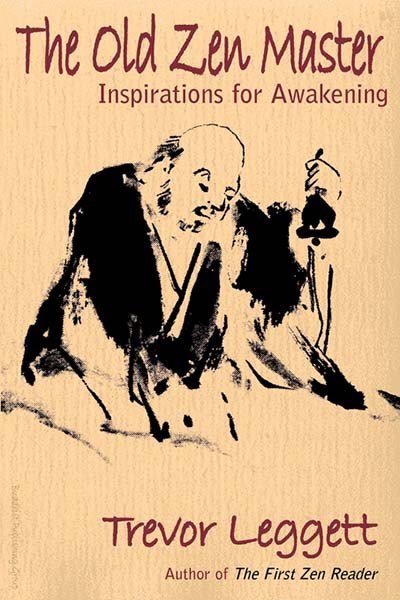 Stories, parables, and examples have been a favour­ed way of conveying spiritual insights and truths since time immemorial, and Trevor Leggett was a master at it. He had the knack of pointing out the spiritual implications of practical events which people can relate to.

The Old Zen Master contains stories based on Buddhism with references to martial arts, music, chess and incidents in ordinary life. He describes this as a freewheeling book: `I am trying to give a few hints which have helped me and which can be of help to others,’ he said.

For those who know nothing of Buddhism or Zen in particular, this is an ideal introduction. It is nevertheless relevant to long-term practitioners as well. As the author points out, occasionally a new slant, a new angle or a new illustration — especially if it is an unexpected one — can be a help in absorbing practice, study and devotion.

In Judo there is a certain grading contest called ‘one-against-ten.’ You have to take on ten men-one after another. They are generally a couple of grades below you, and with luck are so terrified of you, that it is easy to dispose of them. But one or two of them think, ‘Everybody knows I’m going to lose anyway, so I’ve nothing to lose,’ and they come shooting at you, taking fantastic risks. Because you are so sure of your own superiority, which he doesn’t seem to recognize, and because he comes straight at you – ‘whoosh’ – you can’t get the robes of self-conceit and assurance off in time, so that, once in a blue moon, he scores. Then you know what it is like to look an utter fool. This happened to some rather famous contest men who were not fully alert because they felt it was unnecessary. They had already put on the robes of their coming victory. No longer simply the judo champions they ought to be, they became judo champions combined with something restricting – judo champions in cumbersome robes of honour.”

Regrets, Casual Doubts, Taking Refuge in the Sangha, Studying the Holy Texts, Leaves and Moss, East and West, Triumph or Success, A Hundred Hearings Not Like One Seeing, Sword and Mind, Jottings from Zen Master Bukko, If You’re Going to Die Die Quick!, Robes of Honour

“…humour and learning… in his own inimitable way…”

“This is a vintage collection of pieces drawn not only from Zen, chess and the martial arts, but also from the Upanishads, the Old and New Testaments, music and various other sources. Sometimes there are useful hints – how to cope with wearing tasks, a sudden flare-up of anger, nagging thoughts. Sometimes a piece has a deeper meaning, which readers are left to work out for themselves. We are introduced to Zen masters, a famous fencing master and a champion chess player, to name but a few of those to be found in these pages.”

Bukko (Buddha-Light) was an honorific title bestowed posthumously by the Japanese Emperor on a Chinese monk, Tsu Yuen, one of the thirteenthcentury Buddhist teachers who brought Zen to Japan.

From childhood, Bukko had a fondness for temples and Buddhism. One day he heard a monk recite two lines from a famous Taoist classic:

The shadow of the bamboo sweeps the steps,

but the dust does not stir;

The moon’s disc bores into the lake,

but the water shows no scar.

This inspired him to search, and finally he found a teacher who set him the koan riddle: No Buddhanature in a dog. It took him six years to pass this one. He could now sit in meditation for long periods without tiring. Sometimes he passed into trance where breath stops. He said that the inner state was that of a bird escaping from a cage. After this, when he closed his eyes he saw nothing but vast space, and when he opened them he saw everything in this vastness. The teacher still did not confirm this as final but gave him another koan. He passed this second one under the teacher’s successor, who gave him a full confirmation.

Later, when the Mongols were sweeping over China, they entered the temple where he was staying. The others ran, but Bukko calmly remained sitting. A Mongol soldier came up with drawn sword. Bukko recited a poem:

In heaven and earth, no crack to hide in;

Joy to know the man is void and things too are void!

The Mongols were impressed with his courage, and left him alone.

Zen was being introduced into Japan during the whole thirteenth century. Bukko went to Japan in 1280 and lived there for the remaining six years of his life. He was one of the great Chinese priests who brought Zen to Kamakura, the de facto capital. The country faced the imminent threat of the Mongols, who had conquered a good deal of the known world, including much of China. Towards the end of the century, Kublai Khan launched two invasions which were repulsed under the leadership of Tokimune the Regent, one of Bukko’s best pupils. He is regarded as a sort of bodhisattva whose genius saved Japan, aided by favourable winds like those which saved Britain from the Armada. In those times of national crisis, the role of the warrior was paramount, and Zen inspired the warriors. They, in turn, affected Zen, which in Japan took on a strong tradition of warrior virtues. Some of Bukko’s Zen interviews are given in The Warrior Koans collection. (See my The Warrior Koans: Early Zen in Japan.)

In his six years in Japan, Bukko never learned much Japanese, so his sermons and addresses to Kamakura audiences were given in Chinese. They were translated into Japanese by a priest whose name is pronounced Gi-o in Japanese, and who came from the same district in China as Bukko, so could understand his dialect. The exposition is not on Indian lines of logical exposition, but follows the Zen method as it had developed in China. To put it bluntly, both Indians and Chinese like to quote, but Indians generally understand what they quote, at least intellectually. The Chinese tended to quote without necessarily understanding. Perhaps it was to get round this that the genius of the Chinese masters developed a system of giving riddling phrases, to which it is impossible to find a solution in the scriptures. If a teacher says: Two hands brought together make a clap. What is the sound of one hand? It is difficult to find a quotation to answer this. But the master insists on an answer. If the search is continued, it leads to an experience, and everyone who does it comes to the same experience. In a sense, it is a departure from the logical basis of Buddhism, as some scholars and also priests have pointed out.

There was another transmission of Zen to Kyoto, the formal capital, remote from the soldiers of Kamakura. In Kyoto, Zen developed on more logical lines, based on scriptural texts, whereas in Kamakura, where Bukko and others taught so successfully, it came to be based more and more on pure experience. The Shonankattoroku text gives a hundred of the Kamakura interviews, and it is clear that the masters were inventing new riddles based on actual life situations. There were riddles about the moon’s reflection in a bucket of water, about a loincloth, about an earthquake, and so on. Some of the answers had to be lived through in the presence of the teacher. Because of the limitations of Bukko’s Japanese, his presentation of the riddle had to be short, and the answer, too, had to be short.

Even after he and the other Chinese priests had died and left Japanese successors, the tradition remained that both riddles and answers should continue to be short. In a way, this is typical of Japanese adoption of something foreign. The pupils are not sure which parts of the tradition are essential and which are not. So they are afraid to change anything, lest something essential be lost.

Soon after Bukko died, the tradition was established at the great temples that the answer to the warrior koan should be just a single word. And sometimes this word was just a great shout of fearlessness and defiance of anything the world could do. When the news came that the first Mongol invasion fleet had been sighted, Tokimune sought an interview with Bukko, which ended in a great shout. It was said to have frightened the deer in a cave, which is in fact a good hundred yards from the interview room. The shout had to be given from a state in which the shouter is ready to jump over a cliff. The interview gave the warriors freedom from the fear of death.

However, after the Mongol invasions had been repelled, and the Japanese equivalent of the Wars of the Roses had finally subsided, fearlessness was not the only thing required of the ruling class. After 300 years, Kamakura Zen had narrowed to a single track, and the succession died out. No new Bukko arose to revive it, and a new succession of teachers was established from among the followers of Hakuin, whose Zen embraced all areas of life.