TAKASHINA Rosen  is kancho or primate of the Soto Zen sect in Japan. He is reverenced not only by the followers oj this sect; as president of the Japan Buddhist Association he is looked up to by the other sects as one of the great Buddhist figures of present-day Japan. 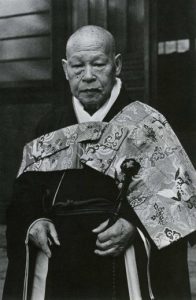 Zetto Zemmi or A Tongue-tip Taste of Zen is a collection of his discourses on Zen, and can be taken as an authoritative exposition by a very eminent contemporary Zen master.TAKASHINA ROSEN.

WHAT I AM going to say about Zen is not an adaptation of formal lectures, but intended as a talk to people who wish to have a correct knowledge of Zen and to understand it. The influence exerted on Japanese life by Zen doctrines and spirit is very great. The miso soup, takuan pickled radish, tofu beancurd, and other things which are the mainstay of our people’s daily diet have almost all come from Zen. The rule of washing the face and rinsing the mouth every morning without fail was laid down by Zen master Dogen in the 13 th century. The arts of the tea ceremony and flower arrangement have the Zen spirit at the root of their formal development. Yet if asked what Zen is, to reply is very difficult. Nevertheless it is hoped that beginners can get from this book a little understanding of it.

Zen master Dogen says in his Shobo Genzo classic that practising Zen means zazen or sitting in meditation. Originally the word Zen (meditation) was an abbreviation for zazen, the syllable za having later gradually dropped out. The same classic says: “Zazen is the front portal of Buddhism.” To enter the inner halls of Buddhism it is proper to go through the front portal. It may seem easier to slip in through a back door, but only when entering by the front with the proper ceremony can we be accepted by the family and know them. Once we know the family we are free to go in by the back door or side door without formality, and it will cause no disturbance to the household.

Buddhism was introduced into Japan in the time of the Emperor Kimmei in the 6th century, but it was only some Buddha images and copies of sutras that came, and not yet the real Buddhism. In the 13th century the patriarch Dogen went to Mount Tendo in China, where he became a disciple of Zen master Nyojo. He “loosed and dropped off body and mind,” and, thus released, returned home, bringing the true tradition of zazen.

The most important thing in connection with zazen— its real meaning as taught by Dogen—is often misunderstood. Some think that zazen is practised to obtain satori (realization), and that when satori is complete, zazen is no longer needed. This is the Zen of “awaiting satori” and it has a somewhat different flavour from the Zen where zazen is itself the Buddha action. In the former, zazen is practised in the spirit of hoping for realization, and only up to that point; after satori, zazen is not regarded as important. But Zen master Dogen stresses that the true way and true tradition of the Buddhas and patriarchs is to sit in meditation for its own sake, and not merely as a means to an expected satori. It is true that when concentrating on a koan, the whole life has to be thrown into the practice with satori as the aim.

The traditional Way is eternal, and so zazen too is eternal. It is the Buddha action pervading all life and all the worlds.

In the East, meditation power has flourished in the world as the basis of civilization, and it has invigorated science, art, technology, economics, and all branches of culture. And so it is said that, in our zazen, practice is not different from realization. In the actual practice, there is the satori in that time and that place, and furthermore both are eternal.

In Japan today there are generally said to be three main sects, the Obaku, the Rinzai, and the Soto. The Obaku sect has its headquarters at Uji. Perhaps because there is such a strong Chinese influence in it, this sect did not develop in Japan, and it has only a few temples. The Rinzai sect is divided into a number of subsects, with head temples at Kyoto, Kamakura, and elsewhere. It has had great influence in the development of literature and art. In its method of zazen the important thing is passing through koan, so that it is called the Zen of awaiting realization. The koan are meditated upon one after another, and stages of satori are attained, koan by koan, like mounting the rungs of a ladder. In this view, it is only after the point of realization that Buddhahood comes into existence. The Soto sect has two head temples and fifteen thousand branch temples, and the sect is not split. The Zen is called “silent illumination” as against the school of “awaiting realization”; the teaching is pure meditation, and the non-difference of practice and realization. Our zazen is sitting with the Buddha seal manifest on body, speech, and mind, and this zazen is the Buddha action. Such is the realization-practice of Zen master Dogen, the uttermost depths of wisdom.

In zazen, as it is said, there is reading the scriptures, performance of duties, taking tea, and taking rice. As against the view that Buddhahood begins only after satori, which is the Zen of realization-with-a-beginning, this is the Zen of reahzation-from-the-beginning. Zazen is the Buddha action of the self which is a Buddha from the very beginning, and so throughout life it never ceases. It is a zazen which manifests reahzation-from-the-beginning or original realization. Thus the same zazen varies among the sects, and we should be clear about it. Each view has its own advantages, and this is not a matter for carping criticism.

Of the greatness of the merit of this zazen, Dogen says: “If all the Buddhas of the ten directions, countless as the grains of sand of the holy river, were to put out all their strength, and by their Buddha wisdom seek to measure the merit of a man in meditation, never could they even approach it.”

Nevertheless, it can easily happen that as meditation power increases with practice, a Zen illness of pride in zazen arises. Normally we are submerged in the thousand confusions of the world, whirled round in the innumerable shifts and changes of life. As a result it becomes very easy to be caught up in things, and then those who wish to release themselves and be free throw themselves into zazen. But as the sitting becomes a major part of their life, they now get caught in the Zen illness. When concentration becomes one-pointed, in their meditation a Buddha appears, or demons or gods; perhaps they feel encircled by a snake, or other phenomena appear. Now all these things, even if it is the Buddha himself who appears to welcome us, are only the Zen illness. They are aberrations of zazen. One thing we have to note very carefully. It is that even if a man sees the Buddha’s form so clearly that he is convinced it is the Buddha, or if he is pursued by a devil-mask and so feels fear, this is all the realm of ghosts and no more.